This section takes you into the often overlooked historical and cultural development of the precious yellow metal and, in doing so, sheds some light on this single item that for centuries worldwide has both enamoured its owners and become one of the public’s most sought after and highly valued possessions. We did some background research, and came across valuable resources from the World Gold Council, the international bullion merchants ATS Bullion Ltd and the National Mining Association, to bring the historical and factual context of gold to the forefront.

As a rare metallic substance with the ability to melt at a staggering 1064 degrees centigrade and to boil at 2808 degrees centigrade, it’s no coincidence that the chemical symbol of gold, Au, is an abbreviated version of the word ‘Aurum’, meaning ‘glowing dawn’ according to Latin terminology.

Originally hailing from the European meaning of yellow - its most prominent characteristic and the only metal in the world that is yellow in colour - the word ‘gold’ comes from the phrase ‘gelo’, as used in the old English language. Although its meaning derives from European language, gold itself has a more extensive history dating back to 4000BC. That is, as a multi-purpose and highly versatile metal, gold has not only been mined throughout the world for many thousands of years but has, more significantly, become the staple cultural item of many ancient civilisations. For example, according to the National Mining Association, an ancient culture from the now Eastern European region utilised gold as a fashion item through decorating, adorning, and displaying highly coveted objects with the bright yellow metal.

Being a highly valued and durable substance, since as early as 3000BC the precious metal was often crafted into complex jewellery arrangements and designs by ancient cultures and civilisations such as the Sumer civilisation of southern Iraq, the Egyptians, and others, and essentially became the basis from which we model our sophisticated and diverse jewellery styles today.

In ancient Egypt - a culture whose often elaborate and ostentatious tastes became part of its then defining characteristics - from approximately 2500BC gold was considered as synonymous with social status and prestige, and as a regal bestowment to members of the royal dynasty. As a token of sovereignty, gold jewellery was decidedly buried in and amongst the tombs of Egyptian kings and queens, including the king of the first Egyptian dynasty, Djer. While gold jewellery was manufactured as early as 3000BC, it wasn’t until a thousand years later in 1200BC - when the Egyptians developed and honed the practice of alloying gold with other metals, experimenting and perfecting its colour variations, texture and firmness - that the art of jewellery-making began to grow more elaborate and complex. And, during this time also, the Egyptians’ technique of casting gold via the lost-wax method became instrumental in jewellery production, a process that is still practiced around the world today.

Following its tracings as an eminent object throughout early history, gold emerged as the world’s standard international currency of exchange, and more specifically as the Middle East’s standard measuring device as evident in development of The Shekel, a coin containing 11.3 grams of gold or approximately two-thirds gold with one-third silver. However, while this heralded in a new purpose for the metal, the advent of 560BC saw the introduction of the world’s first pure gold coins as minted in a kingdom of Asia Minor known then as Lydia, part of Turkey.

Additionally, with its abundance of gold-bearing areas, particularly in the regions of Nubia, ancient Egypt soon became one of the world’s wealthiest nations. It was at this point - as a unit of measuring and conducting trade worldwide – that it at once became the single most powerful naturally occurring element, and reached the earliest beginnings of what was to become the pinnacle point of its cultural evolution.

In order to determine its level of purity, in our modern era gold is commonly assayed using highly technical processes and equipment, however when and how did this method first originate? According to the National Mining Association, in 1350BC the Babylonians originally utilised basic tools such as fire to assay the purity of gold, and it was this technique that both formed and underpinned the foundations of our modern system.

In 202BC, during a period when the earliest Dead Sea Scrolls were created, the Romans had made their mark on Spain and consequently, through early hardrock mining techniques and stream gravels, gained access to and recovered gold from its most lucrative gold mining regions. 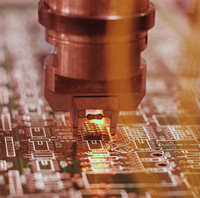 In contemporary times, gold is utilised in many thousands of varied and innovative ways, not the least of which includes its instrumental uses in industry and business.

Whether it’s in military or civilian life, gold has continued to play a major role in the advancement of technology. In 1970, the invention of the charge-coupled device introduced a new use for the metal. The device, initially used to detect light generated from the stars, uses gold as a way to collect light-generated electrons, and is now used in home video cameras and other similar devices. For example, in 1960 the invention of the laser became patented to AT&T Bell Laboratories. Its use, in the form of gold-coated mirrors, enabled its users to enhance infrared reflections into lasing crystal, and was thus central to the development of modern technologies we have come to familiarise ourselves with today.

But perhaps its most fundamental role in the modern era is its application to space and aeronautical science. The world’s leading space science institution, the National Aeronautics and Space Administration’s (NASA) has instrumentally used gold in its many operations, notably as a gold-coated visor to protect astronauts’ eyes from direct sunlight. While Col. Edward White made the first space walk with a gold visor back in the ‘60s space race, gold sun visors still remain a standard protective feature for astronauts today. Moreover, in the early 1980s, a period when the space shuttle was launched, gold -plated impellers were used to form part of the liquid hydrogen fuel pump. As late as 1996 gold has been adopted for numerous space expeditions, such as the launch of the Mars Global Surveyor. In the form of an onboard gold-coated telescope-mirror with the unique capability of producing a detailed surface map of Mars, coupled with its use in the form of large gold-coated mirrors in capturing the finest detailed imagery of Neptune and Uranus, the metal has pioneered the technological makings of today as well as the future.

Although on record, there may be over 150,000 tonnes that have been mined throughout the world in the modern era, it remains as the world’s most precious metal. It has been estimated that all the gold in the world that was refined would form a single cube 20 metres (66 foot) a side – length 20m x width 20m x height 20 metres. Historically used as an ancient currency and unit of exchange for many regions of the world as well as an indicator of wealth and class, for centuries gold has certainly been and is still a rare and valuable commodity in today’s world.

While gold resources become increasingly scarce combined with a decline in global gold production levels, the bright metal will no doubt continue to be a popular choice worldwide.