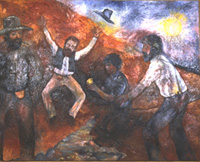 Charters Towers, Queensland, only a short 90 minute drive from the coastal town of Townsville (located 1,000 kilometres north of Brisbane City), is renowned today as one of the state’s few 'alive' historic gold mining towns  with original 1890's style heritage.

While gold mining was first introduced to Australia in the early years of settlement, during the second half of the nineteenth century on an expedition to locate some missing horses, a young 12-year-old indigenous boy named Jupiter Mosman made history. Jupiter, a stockman, was traveling with the prospecting team of Hugh Mosman, George Clark and James Fraser. While Jupiter located the horses sheltering at the base of what has come to be known as Towers Hill, he accidentally stumbled across a bright glimmer of gold nestled in a nearby stream. It was 24 December 1871, a pivotal year that marked the beginning of a new era of gold discovery in the greater Charters Towers area. This find not only quickly placed Charters Towers firmly on the map in terms of lucrative gold mining prospects, but in the process established it as a world-class district and as Australia ’s richest major goldfield.

In approximately 1886, samples of ore bodies were extracted straight from the rich Charters Towers goldfields and shipped across the other side of the world to the Colonial and Indian Exhibition in London. Daily demonstrations of ore crushings showcased the Queensland metal as a solid and lucrative investment. This was accelerated with the publishing of a prospectus in The Times newspaper in London dated 30 October of the same year, inviting investors to purchase up to 60,000 shares at one pound per share (about $6 million today). 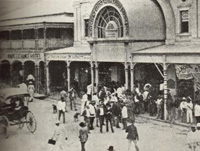 The initial discovery of gold in the greater Charter Towers area was followed by a peak mass migration of 30,000 miners, investors and entrepreneurs. Together with their international investments from various corners of the world they converged on Queensland’s most important goldfield seeking a piece of the enormous fortune during the height of one of Australia’s major historical gold rushes of the early era. This was all due to the extraordinary amounts of gold discovered and the consequent wealth generated from the prosperous resources of the local mines.

After the easily won gold on the surface was found, the early miners started following the quartz reefs underground. By 1898 the Charters Towers district was producing more than 320,000 ounces of gold per annum, establishing it as the richest major goldfield in Australia as well as an internationally-noted goldfield for many years. The Queensland gold production record of 320,000 ounces set in 1899 was unbroken for the next 100 years. Government records show that in today's Australian dollar, the mines paid out approximately A$900,000,000 ($900 million) in dividends to their shareholders.

However, with rising inflation and a fall in the real price of gold (the gold selling price was pegged by the government and had been for 300 years until the 1930's), production levels soon began to decline which particularly affected the myriad of small operators largely extracting ore by manual methods. With production falling, wages rising, materials expensive and in short supply after WW1, and an absence of dividends or reinvestment, mining the Charters Towers gold field started to slow down and eventually ground to a halt in 1917.

The gold veins never actually "ran out" – miners simply abandoned shafts. This production decline was similarly echoed across Australia with the nation as a whole experiencing 60% inflation in costs; and yet a fixed gold selling price meant that all profitability eroded away.

Richness of the Charters Towers goldfields 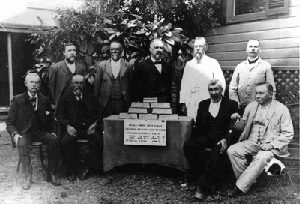 Historically, the Charters Towers goldfield was renowned as Australia's richest major field, with an estimated production totalling in excess of 6.6 million ounces (over 200 tonnes). Throughout its lifespan between 1872 and 1917, the fields recovered 6.1 million tonnes of ore, at an average ore grade of 38 g/t (1.22 ozs). The grade represented the largest gold producing field in Queensland, comprising 36 percent of the state’s total gold production. It has been estimated that the quality of the gold ore grade from the Charters Towers mines was almost double that of Victorian mines and almost 75 percent higher than grades of Western Australian (Kalgoorlie) goldfields of that time. A spectacular achievement.

At the time the town’s mining wealth and resources attracted thousands of workers from diverse regions throughout the world including England, China, Germany, Ireland and Scotland among many others. They called the region their home, the greater Charters Towers area, and it became a self-sufficient cosmopolitan town with sports, arts and music facilities that was popularly dubbed ‘The World’. They mined their own money, the gold, and had everything they wanted.

A multicultural melting pot, with a vast and unparalleled lifestyle, world-class facilities and a thriving social energy, was considered as the hub of society in the north back at the turn of the nineteenth century. Charters Towers has more heritage-listed establishments than any other town or city in the northern state and its grand buildings such as the Stock Exchange Arcade and the Bank of Commerce are currently listed by the National Trust of Queensland. The city's aesthetic streetscape is largely dominated by nineteenth century-old buildings that, to this day, both showcases the opulence of the golden settlement era and represents the influence and wealth of gold in the area.

At the same time, this enormous wealth generated from the Charters Towers mines helped build Queensland's then biggest city outside the state's capital city of Brisbane with a population exceeding 26,000 at the time. Charters Towers currently has a population of about 8,500. 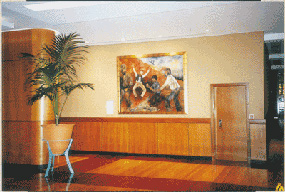 While Jupiter Mosman’s find marked the discovery of gold in Charters Towers and heralded in a major windfall for the people of Queensland, it was with this same jubilance a century later in 1983, due to his historical role in shaping the northern state, that Jupiters Limited was incorporated and resulted in the establishment of the Jupiter casinos in Brisbane, Gold Coast and Townsville, keeping the spirit and historical significance of Jupiter Mosman alive.

This pinnacle in Queensland’s mining history, when Jupiter plucked that first gold nugget from the stream in Charters Towers, has also been captured on canvas by renowned Australian artist Marji Hill in her original oil painting ‘Jupiters Lucky Strike’ which is currently hanging in the foyer of Ville Resort Casino Hotel (previously Jupiters Townsville Hotel and Casino). Marji Hill has been involved in many aspects of Aboriginal affairs which have provided much of the inspiration and influence for her artworks.

The largest reported gold nuggent found at Charters Towers was in 1920 (after the goldfield ceased production), weighing an impressive 143 ounces (4,450 grams) by Tom Hoy, a Chinese prospector. 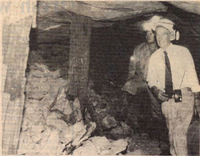 The modern Charters Towers story began in 1969. The gold price was then fixed at US$40/ounce and gold mining in Australia was a struggle and relatively unimportant. Yet the project founder, Citigold Corporation’s Founding Father was Mr James 'Jim' Lynch, believed the price would rise. He felt that with modern methods and sufficient capital Charters Towers had the potential to yield as much gold again as it had in the past.

Over the next 15 years he conducted extensive field prospecting and research. He engaged with geologists and spoke with many of the residents of Charters Towers who had worked in the old mines, and had first hand knowledge. They all concluded there is a lot of gold laying underfoot. He also conceived the idea of consolidating the myriad of small tenements and set out to acquire those he could. A change in Queensland mining legislation in 1984 encouraged such amalgamation and accelerated his efforts. For these reasons and the company’s aspiration to see the goldfields come to life again, Mr Lynch successfully acquired the entire 100 square kilometres of the central goldfields and beyond. Thanks to the foresight, efforts and dedication of Mr Lynch, Citigold Corporation now sits on rich mineral lands with the potential to generate enormous wealth for the company’s shareholders and bring great prosperity to the city. This amalgamation, completed in 2004, meant that for the first time in history one company controlled the goldfield.

This five square kilometre maze of shallow mines (owned by Citigold Corporation today) produced the majority of the massive 200 tonnes of gold mined between 1872 and 1917. Only a few mines reached 700 metres in depth even though the gold continues much deeper as proven by modern drilling.

Development of the Citigold Corporation Logo

The significance of the 10 gold bars…

Since formation the company has had the pyramid of 10 gold bars as a part of its logo. These gold bars represent the 10 major gold reefs – Brilliant; Day Dawn; Queen; Victory; North Australian; Mexican; Just-In-Time; Rainbow; Moonstone; and Welcome that historically produced much of the Charters Towers gold riches.

The real gold bars these reefs produced were the foundation upon which the great ‘City of Gold' of Charters Towers was built. For this reason, 10 gold bars were chosen as the symbol of Citigold Corporation. The blue 'stamp' or 'chomp' of the CiTi represents the seal for the branding of gold bars.

The Charters Towers was shortened to 'CiTi', the 'mines' was dropped and the GOLD remained. Our previous old web domain was 'ctgold' so it seemed like a natural extension to 'citigold'. The 'Corporation' was added to identify to the world that we are a major GOLD corporation.

"CITIGOLD" is registered as a Trade Mark for gold with the Commonwealth of Australia Trade Mark Office.